Okay, I officially cannot feel my feet and I have been passing out as soon as I hit the bed at night.  The night before, I was talking to my sister in her room and the next thing I remember was waking up and saying “Why am I still here?”. Signs of a weary traveler!  I thought I would at least make it into day three before this started happening! Day 3 itinerary is even more aggressive. Even more so that I have decided to split the blog post into three!

My Taiwanese friend helped us book a driver for the whole day so that we can explore Yehliu Geo Park, Jiufen or Chiufen, and Pinxi. Based on the driver, these places apparently are about 45 minutes from each other and Taipei. So it is best to rent a driver in order to get through all of it. We didn’t get to go see the Shifen waterfall because of time. Next time Shifen!  It’s also ideal to go on a weekday as on the weekend these places are super crowded! It cost about $140 USD to book the driver for the whole day which is 8 hours. After 8 hours it is about $13 USD per hour. We split between 5 people so it was super affordable. The driver did not speak English so I had to rely on my limited Chinese. 4 years of college Mandarin to the rescue! The driver was really nice and showed us where to go and where to eat. We had such a great time that we all passed out in the car while he was driving us back at night!

Yehliu Geo Park is located at the end of a cape in a fishing village. The cape was formed as geological forces pushed the Datun Mountains out of the sea. The scenery, landscape, and ocean are breathtakingly beautiful. It really was a feast to my camera. The park houses numerous natural rock formation that they have imaginatively named based on their shapes. The most famous is the “Queen’s Head”. Unfortunately because of natural erosion the neck may not support the head much longer. Go see it! 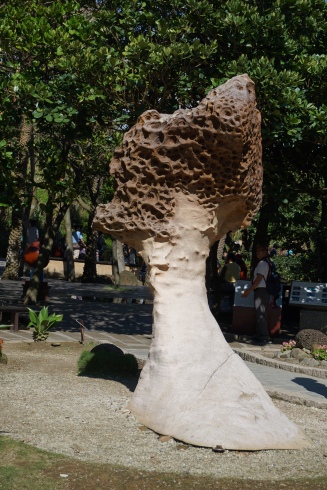 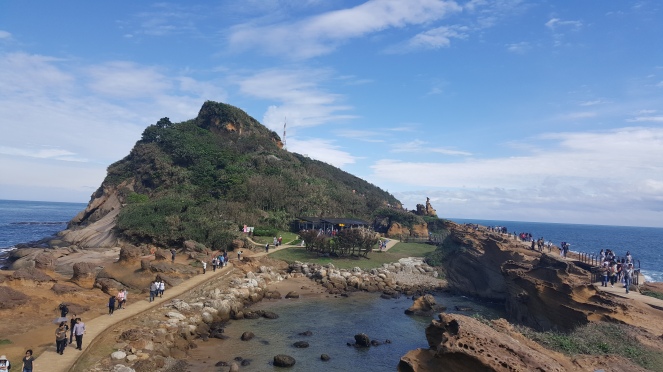 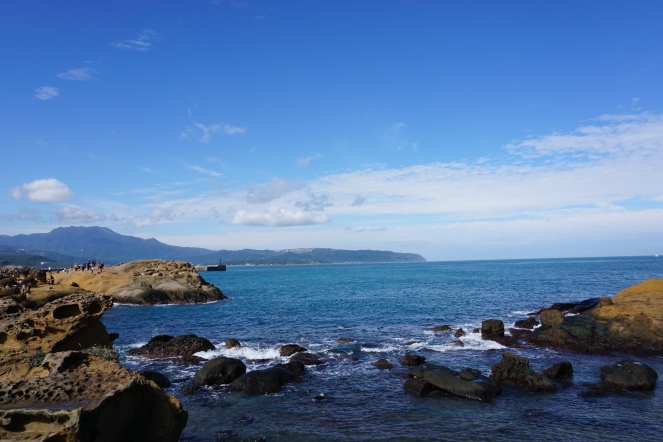 While waiting for the driver to pick us up by the 7-11 at Yehliu Park, we tried some Taiwanese fruits. Taiwan’s subtropical weather and land is ideal for growing tropical fruits. There are so many different types of fruits in Taiwan. Many of the fruits I have never heard of or seen in person. They are all really delicious! I hope they start importing java apples to the States…mmmm

Taiwan is an island surrounded by water and thus seafood is abundantly available and a main source of protein. Yehliu is also known as a fishing village. I was told by the driver to try the seafood near Yehliu park; especially the local crabs! We went to a restaurant a bit away from the park itself as this is where all the locals go to eat. The other reason was that the prices of the restaurants near the park are more expensive because of tourists. The restaurant that we were brought to is called 小微海鮮料理 (Xiǎo Wēi Hǎixiān Liàolǐ). It’s located at No. 16之1號, Yuao Rd, Wanli District, New Taipei City, Taiwan 207. We picked out a couple of seafood from the front of the store (live!) and the nice lady out front helped us choose how it should be prepared. The place is two floors. You should definitely sit upstairs. If your party is big enough they will sit you near the window where you get the awesome view of the ocean. All the seafood dishes were super fresh and tasty.  One of the dishes we were obsessed about is this stir-fried Taiwanese water lilies that the driver suggested was a must-eat since it is hard to find outside of the country. The vegetable is stir fried with garlic and red chilies. The vegetable itself is crunchy and really refreshing. I really miss it. I should really research on how to grow some of this! 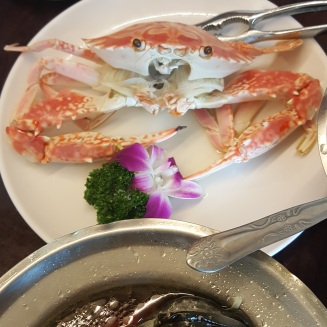 Have any suggestions or comments? Leave them below the blog!